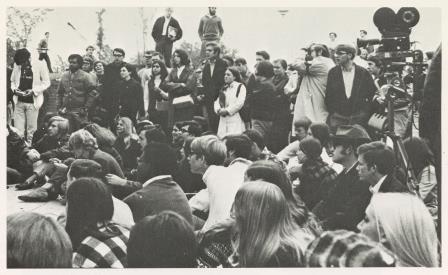 UNC Charlotte students, faculty and staff participate in the Vietnam Moratorium on October 15, 1969. The day-long event was part of a larger nationwide Vietnam Moratorium movement which involved around 500 college and university campuses across the country. At UNC Charlotte, between 300-500 people turned out to hear a series of anti-war speeches (above). Rouges 'N Rascals (1970): 30.

See also - Rouges 'N Rascals (1972): 11. "This was the year... of the Billy Graham Day, when Charlotte welcomed Graham and Nixon to the Coliseum, but threw out many of her own students and citizens..." 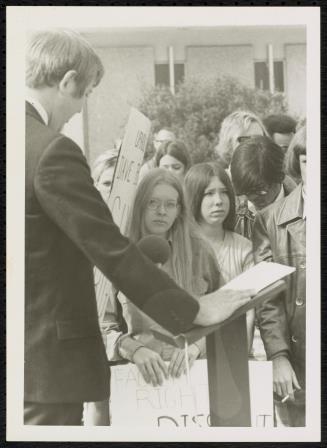 Students protest the dismissal of Dave Blevins, an adjunct professor who faced disciplinary action for releasing his students from his class so they could attend the Moratorium (on right). UA0066.