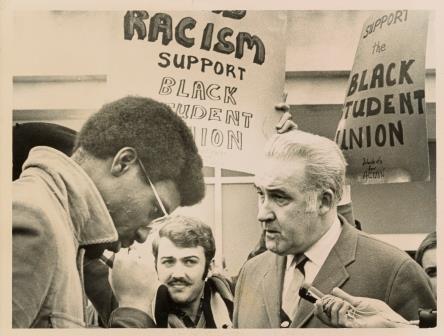 March 3, 1969. Benjamin Chavis, student and chair of the Student Union Board, speaks with Charlotte City Councilman Sandy R. Jordan in front of the Administration Building during the student protest for the Black Student Union (left). UA0661.

"Because of the mood of the country with the Black Panther Party and race riots developed soon after that, there was a fear element. and so we were more feared, because... everybody else assumed that we were a violent organization when we weren't." - transcript, Ronald R. Caldwell oral history interview, May 31, 2005.

"We still got involved, but we got involved [and] organized. We were organized to get involved. It wasn't haphazard." - transcript, Dorothy Dae oral history interview, October 11, 2004. 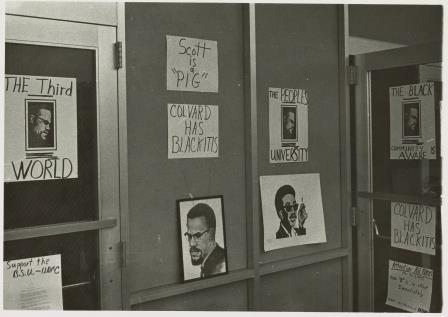 "There were a few people that we didn't quite see eye-to-eye with, but most of them, most people were willing to at least listen and try to do something. That was uniquely different for UNCC and I think a lot of that came from the top, from Bonnie Cone." - transcript, James Cuthbertson oral history interview, July 28, 2004.