Cherry remains one of Charlotte’s oldest surviving African American neighborhood, located near the Myers Park suburb. According to local historian Dr. Thomas W. Hanchett, the neighborhood’s development was quite unusual upon its inception. Cherry was platted in 1891 by John Myers using land that was part of his thousand acre cotton farm. One of the only two sources speaking to the Myers’ desire to aid the black community is a newspaper article from the mid-1920s, noting Myers wished to “develop [it] for the negro race, giving them such modern conveniences as would make for their contentment and comfort.” The author noted that the anticipated outcome was better citizens and homeowners, reflecting that the community would produce “thrifty, industrious, well-behaved and constructive forces in their race."1 Regardless of the original goal, Cherry provided housing for black skilled and unskilled labor at the turn of the century, giving residents the option to rent or purchase homes and creating a community that boasted “urban amenities including a city park, school, churches and tree-lined streets.”2

Home ownership in Cherry increased from twenty-six percent in 1905 to as many as sixty-five percent by 1925. The Myers sold lots ranging from $40 per lot, to $100; still an affordable sum compared to the $300-$600 lots available in Washington Heights, a black middle-class suburb across town that included streetcar service. Cherry would have been distinct from a middle-class, however. The Myers appear to have targeted urban laborers and census records from 1898-1910 show a number of skilled and unskilled laborers, working in cotton mills, for railway lines or as delivery men. After the incorporation of Myers Park in 1910, the number of household servants and gardeners rose within the community. 3

Myers also sold land for two churches to be erected in the community; Pleasant Hill Baptist Church and a Lutheran church that later became Mount Zion Church of God Holiness in 1946. In 1919 the Myers family deeded a parcel of land to create the Myers Chapel A.M.E. Zion Church. Morgan school, named for a member of the Myers family, was built in 1925 and boasted ten classrooms. Although the school closed in 1968, the building is still used as a community center and has been surveyed by the Historic Landmarks Commission. The family also designated land for a community park. Morgan Park, which would become Cherry Park in 2006, was initiated in 1927 and is still heavily used today. 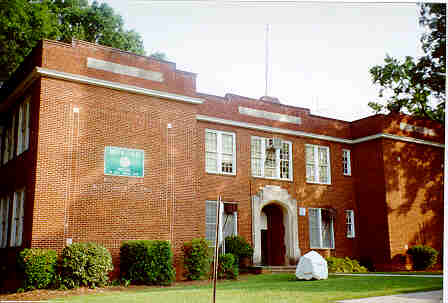 John and Mary Myers transferred control of their Cherry holdings to their children. Some improvements were made between the 1930s and 1940s, including the installation of indoor restrooms and general updates to home’s foundations and support columns. The 1950s saw the expansion of black owned properties and the changes in the urban structure of the Charlotte neighborhood. With the expansion of Charlotte, Cherry had become a central neighborhood, “too well located for its ‘highest and best use’ to continue to be low-income housing.”4 The growth convinced John Dwelle and Brevard Myers to begin increasing their holdings in Cherry. Targeting many of the neighborhood’s elderly home owners, only 17 percent of the 1800 residents of Cherry were property owners by the 1970s.  Cherry was one of the few neighborhoods to escape federally-funded Urban Renewal. The black neighborhoods of Brooklyn, Greenville, First Ward, and Third Ward would not be so lucky. As a real estate developer, Brevard Myers had plans to demolish the oldest portions of the neighborhood to make way for stores, offices and upper-income apartments. In response to this, an active residents’ organization, the Cherry Community Development Association, was organized in the 1960s and succeeded in getting some federal funds for community improvements.

Cherry residents used their new organization to fight for improvements to residential housing. In a three year battle with the city, residents formed a corporation and persuaded the city to spend $1 million to buy out Cherry landowners Brevard Myers and John Dwelle. The Cherry Community Organization would then purchase property from the city, and rehabilitate homes with city-sponsored low-interest loans, collecting rent from the remaining property. The plan was praised by the federal government as “one of the most innovative community projects in the country.”5 Although the historic character of the community may have changed with the building of new houses, the efforts of the Community Organization helped the neighborhood to stay true to its initial goal; providing housing for low-income African Americans.

The twenty-first century has brought new challenges, however. Gentrification has struck the community as developers purchase land and affluent homeowners relocate to Cherry.  Writing for Next City, Sherrell Dorsey notes “longtime residents fear that rapid growth and displacement will erase Charlotte’s oldest and last-standing historic black community.” Access to public transportation has also aided gentrification as developers move in to purchase vacant lots and cheap houses. Evidence of the threat can be seen through the shift in demographics. Cherry’s black population has diminished from sixty-six percent in 1990, to fifty-five percent in 2000, to only thirty-seven percent by 2015. That same year, residents began fighting each other when a rezoning decision came before city council. The zoning would have allowed affordable apartments and rentals to be built; a strategy that older residents approved of, as it would help them stay in the neighborhood. Newer residents worried that the measure would change the single-family nature of the community. 6 As of September 2015, a new measure had been approved to bring “a hotel, apartments, retail space and a parking deck to the neighborhood."7

Although the historic narrative of the neighborhood can never be erased and is remembered through plaques and historic landmarks designations, its future as a community of moderate-income housing is unclear. The Cherry Community Organization continues to exist as a nonprofit, dedicated to preserving the historic nature of the community and providing “housing opportunities to low and moderate income individuals."8

Neighborhoods in Charlotte. Charlotte-Mecklenburg Planning Commission, Planning and Development of Charlotte, N.C. (HC107.N82): 1960-1970 Includes census information including race statistics and population change, as well as a hand drawn map of the neighborhood.

Images of the Cherry neighborhood. From MS 350. Charlotte Redevelopment records

2004 December 21, Speaks of her education at Morgan School in the 1960s. Baxter makes it a point to speak of community togetherness and how supportive Cherry was.

2004 November 23, Calvin and Naomi Davis describe their experiences as students, teachers, parents, and grandparents in the Charlotte-Mecklenburg school system.

2006 November 18, Davis discusses growing up in Cherry with special emphasis on race issues.

2004 June 4, Davis speaks about racial mixing that apparently occurred at a “bootleg joint” in the Cherry neighborhood, and about his father teaching night school to adults in Morgan School.

2004 May 12, Dial’s perception of Cherry includes his view of it as a teenager (his girlfriend lived there) and the community’s view of it today, as he has friends that live there.

2005 May 2, Patton talks about his education at Morgan Elementary School in the Cherry neighborhood.